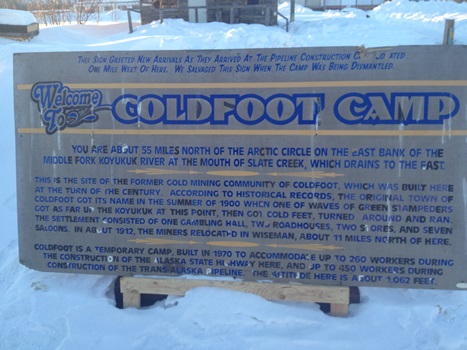 My life working in travel has taken me to some spectacular places and along the way I’ve met countless fascinating and kind-hearted people but, it was the people I didn’t meet on Alaska’s James Dalton Highway who impressed me as much as anybody.

The Dalton Highway was built as a service road to support the construction of the Alaskan Pipeline and nowadays its principal purpose is to serve the oilfields in the far, far north of America’s 49th state. Kings of this particular highway are the huge trucks that ply their trade along its 414 mile course and any fans of the TV programme “Ice Road Truckers” will be familiar with their burly, lumberjack shirted drivers. Theirs is a dangerous job. Here in Alaska’s wildest frontier there is little in the way of shelter or support for any driver whose truck breaks down or, worse yet, crashes. The road signs tell the story best. For example, as the truckers head south from Prudhoe Bay they encounter the news below.....