“I expected Alaska to be the greatest place I’ve ever visited. It was ten times better than that” (Ali McLean - Founder of Artisan Travel)

When you see a sign saying “Next Services 240 Miles” you know you are somewhere pretty darn big. If you cut Alaska in half then Texas would instantly be demoted from second largest state in the USA to third largest. Alaska is big!

The state’s size poses a few logistical problems because transport infrastructure is thin on the ground. Even the largest city, Anchorage, only has two roads leading out of town, one northwards and one south. Many wilderness spots are only accessible by air.

Just getting from Anchorage to Fairbanks requires a long, long drive up the Dalton Highway of Ice Road Truckers Fame (it’s heavily compacted snow, not ice – shhhh!). It’s a fabulous journey but when time is of the essence it’s far better to fly and enjoy the views of Denali, North America’s highest peak, as you track the course of The Dalton and the Alaskan Pipeline.

There are other ways to get around of course, such as dog sledding. The Iditarod is probably the most famous dog sledding race in the world and a throwback to a time when goods, postal services and famously, life-saving serum, were delivered by mushers. It is Alaska’s most iconic winter event pitting man and beast against a harsh and pitiless wilderness. The Iditarod sums up the adventurous and pioneering spirit that makes Alaska so utterly compelling.

A Country Of Two Halves

Few places in the world change as dramatically as Alaska does from winter into summer. The difference here is so marked that it really requires a minimum of two visits to fully understand this great state.

Winters are long and hard but to witness Denali, America’s highest peak under an ice blue sky or the mighty Yukon River reduced to stationary ice is bordering on life-affirming. Similarly, standing on the ice of a landscape defining glacier or underneath a pitch black wilderness sky alive with dancing Northern Lights creates memories to last a lifetime.

March brings the excitement of the Iditarod, Alaska’s great dog-sledding race. If you fancy having a go yourself we can line you up with some of the dogs from the kennels of 4-time Iditarod champion, Dallas Seavey.

In summer, Alaska comes alive and there can be few places more alluring than the likes of Denali, Kenai Fjords and Lake Clark National Parks. The lakes sparkle, the fjords glisten, meadows abound with wildflowers and the mountains lose all but a peak-topping covering of snow.

There’s wildlife in abundance too. Take a small plane flight over the oceans; these often reveal the presence of whales and bald and sea eagles amongst other coastal creatures. Inland, it’s the bears, wolves, caribou and moose that demand the attention of wildlife lovers.

We always like to highlight a few of our favourite experiences in the destinations we feature but where do we start with Alaska? A quick straw poll around the office came up with the following Alaskan experiences. So, in no particular order:

The Iditarod – The annual dog sled race is possibly the most important event in the Alaskan calendar. Join enthusiasts and mushers at the ceremonial start in Anchorage.

Glacier Cruise into Prince William Sound – Bordered by mountains and 150 glaciers, the sound is home to hundreds of islands with beautiful shingle bays and a huge variety of wildlife. 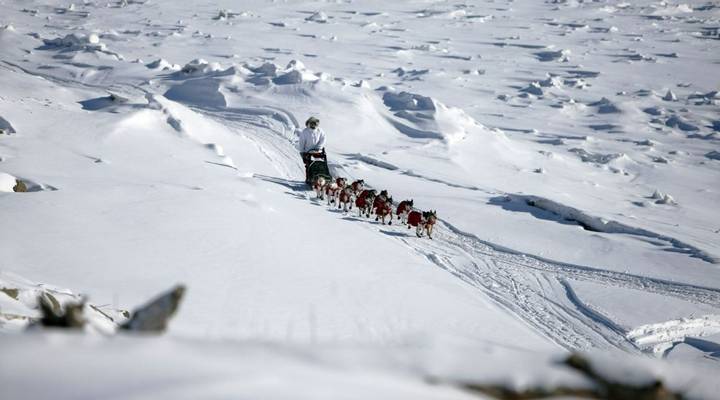 The Spirit of Alaska: Iditarod

The Spirit of Alaska: Iditarod

America’s largest state is more than twice the size of Texas and is quite simply somewhere absolutely everybody should visit at some stage in their life.

Alaska is as close to the last frontier as you’ll get in the modern world and it is populated by hardy folk especially beyond the largest cities of Anchorage, Fairbanks and Juneau.

Winter can be pretty harsh at times but brings thrilling adventures such as dog sledding and hunting for the Northern Lights. The most famous dog sledding race in the world, the Iditarod always has its ceremonial start in Anchorage on the first Saturday in March. The city buzzes with excitement and enthusiasm for what is trademarked “The Last Great Race”. It sums up Alaska and Alaskans in that it’s all about man and beast against the toughest of terrains and, very often, the harshest weather imaginable.