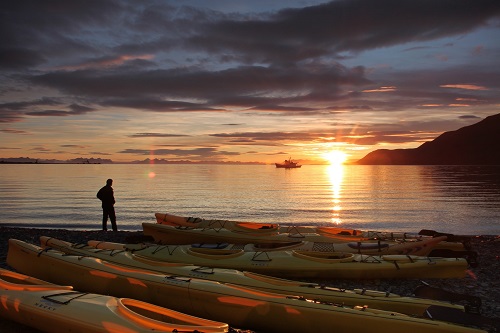 Rather than battle through the crowds during your summer holiday, why not choose a location away from the flocks of tourists without having to sacrifice on culture and interest?

Going off-the-beaten-track allows you to explore an interesting destination at your own pace. You’ll feel like you’re really discovering a location when you’re away from masses and it’s just you, the locals, the landscape and only a few other savvy travellers.

So, in order for you to make the most of your summer holiday and have the best chance of skipping the crowds and flying under the radar, we’ve put together our four alternative summer escapes for 2019.

Witness the phenomenon of the Midnight Sun in Spitsbergen, Norway this summer ☀ Our new blog post explores four alternative summer trips you can enjoy in 2019. Click the ‘About us’ tab on our website to read! ©Frank Andreassen & www.nordnorge

Spitsbergen is the largest island of the Norwegian archipelago of Svalbard and is situated halfway between mainland Norway and the North Pole. Its location should not be a deterrent, however, as the climate is surprisingly mild and it boasts an extremely scenic Arctic landscape, particularly in summer when the large variety of plants and wildlife come to life.

What’s more, the summer months also bring the phenomenon of the Midnight Sun, where the sun never sets below the horizon. This gives you plenty of time to revel in the astonishing surroundings.

During this holiday, you’ll spend six nights exploring this wonderful part of the world. Staying in Longyearbyen, you’ll embark on two boat trips to see the biggest points of interest including glaciers, ghost towns and the Global Seed Vault.

Even though you’ll be travelling in summer, you can also experience the brilliant Arctic activity of dog sledding. With the absence of snow, this version will be on wheels but it is just as exhilarating and is one of the best ways to see more of the spectacular surroundings.

Breathtaking views across the island of Senja

Northern Norway is a spectacular sight of fjords, mountain landscapes and white sandy beaches, made all the more stunning in the orange glow of the Midnight Sun.

During this 10-day self-drive holiday, you’ll explore the ‘capital of the Arctic’, Tromsø as well as the islands of Senja and Sommarøy which both boast inviting white sandy beaches.

There’s also the opportunity to whale watch in Andenes and spend two nights in a wilderness camp, which is made up of comfortable tents with cosy beds and large windows - so you can keep an eye on the spectacular nature around you.

Click here to view this holiday to Northern Norway.

Discover Greenland, the world’s biggest island as well as Iceland, the land of fire and ice during this small-ship cruise. You’re not short of natural wonders to admire when you visit either of these countries, but this cruise centres on seeing the real highlights.

Over the course of 13 nights, you’ll go from Iceland’s bustling but quaint capital city Reykjavik to the city of Nuuk, the capital of Greenland and the oldest city on the island.

Along the way, you’ll see sights such as the Eqip and Sermeq Kujalleq glaciers as well as the UNESCO World Heritage Site of the Ilulissat Ice Fjord.

You will stay on board the MS Ocean Diamond, a ship well-equipped for the Arctic without having to compromise on comfort or modern amenities.

View this holiday to Greenland and Iceland here.

Iceland’s natural beauty is no secret but it’s not always a sought-after summer destination for people. However, with the endless light of the Midnight Sun and the countless colours that shine onto the unbelievable surroundings, we think witnessing Iceland in the summer should be on everyone’s travel list.

This four-night stay is all about showing you the highlights. From the famous Blue Lagoon to exploring the world’s northernmost capital city, Reykjavik.

You’ll have plenty of free time to tailor your trip to suit you. Perhaps you want to see the Golden Circle or maybe you want to snorkel between continents, you could even extend your stay and spend longer than four nights here.

We have, however, included the must-do activity of whale watching. During this three-hour boat trip, you could see minke and humpback whale as well as white-beaked dolphins and harbour porpoises.

View this holiday to Iceland here.