Even before setting off for the Azorean island of Sao Miguel I was filled with anticipation about the prospect of swimming with dolphins in the Atlantic Ocean. I knew that it wouldn’t be a sanitised marine park experience and, as with everything involving Mother Nature, the extent of my contact with these supremely intelligent animals would be very much in the lap of the gods. It was even possible that I wouldn’t see any dolphins at all but regardless, there were a few butterflies dancing in my stomach. After all, it’s not every day you get to tick off another animals item is it?

Prior to departure it was very reassuring that the pre-swim briefing was delivered by a qualified marine biologist who highlighted the need to respect the dolphins and how to behave around them. There was also a strong emphasis on the fact that the ocean is the dolphins’ natural environment and that any interaction with them would be entirely at the animals’ discretion and on their terms. From what I have read, Dolphins in captivity can live very stressful lives and their longevity is often curtailed so it was good to know that there well being is being overseen by experts who care so much about them.

Only two people are allowed to enter the water at the same time from any one boat so our small group set off in two zodiacs with six excited passengers in each.  The boats picked up pace as we left the harbour and as we sped across the Atlantic under an azure blue sky, we kept one eye out for the dolphins and another on the magnificent volcanic scenery of the island. The weather here is so unpredictable and I was particularly struck by the fact that while we were enjoying warm sunshine, the island’s peaks were bathed in cloud.

Suddenly, we heard a shout from our guide and everyone immediately squinted in the direction he was pointing. Just above the surface of the water and about 20 meters from our boat was a pod of dolphins. They rose and submerged effortlessly as they curved smoothly in and out of the water emulating a rapidly moving Loch Ness monster. 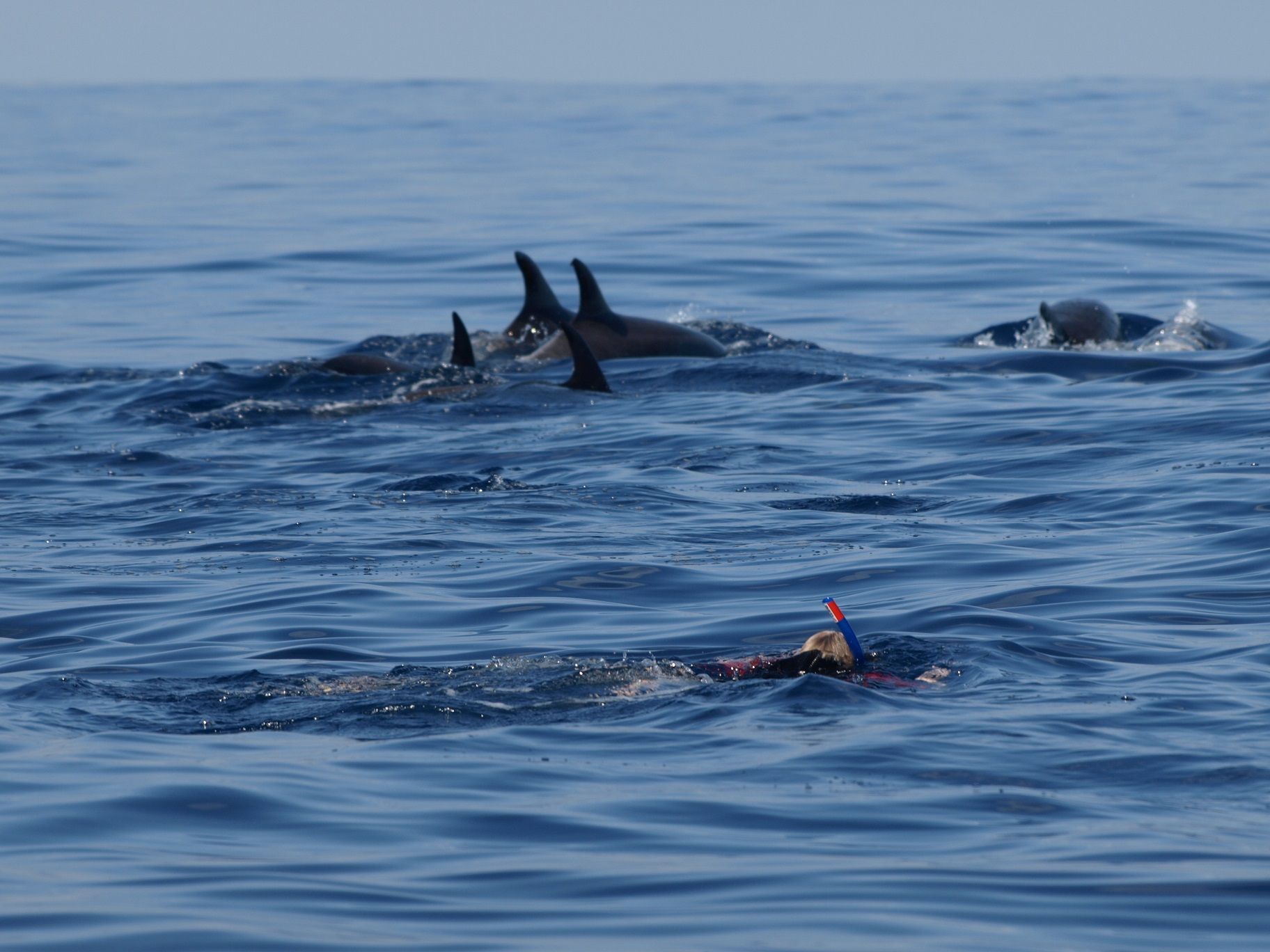 The boat stopped and as they slowly swam towards us the adrenaline in my stomach started to work overtime. This may have had something to do with the fact that at a slower speed their fins appeared disconcertingly shark-like in appearance. Sharks or dolphins? There was only one way to find out and on the guide’s instruction I slipped gently – or as gently as a middle aged man weighing 14.5 stones can – into the water. After a brief moment of disorientation, I managed to get my bearings and spotted the pod which must have comprised at least 20 animals slowly swimming away from me. I didn’t get particularly close to them (according to our guide, my-ever-so-graceful plunge into the ocean had probably frightened them!) but to witness these remarkable animals in their natural environment was an absolute privilege.

Their movement is effortless, their grace and beauty is something I couldn’t even begin to describe. Suffice to say that I very much envied them their sleek manoeuvrability and the unbridled joy they seem to bring to something as quotidian as movement.

In total I left the boat about six times. On a couple of those occasions the dolphins were skittish and had swum away before I could even work out which way I was heading but on the other occasions I again witnessed whole pods just languidly passing away the time.

Eventually, they grew weary of our company and simply swam away from our vessel whenever we stopped to join them. Whilst I was naturally regretful that the experience was at an end, I loved that it had ended on the animals’ terms. The interaction was done for as long as they saw fit and once they had grown bored with our company they chose to disregard us.

That for me is absolutely vital because in captivity dolphins are often simply on call to perform for the gratification of a paying audience and - whisper it quietly - for corporate profit. Like many, many animals on our planet, dolphins deserve far, far better than that and what made my Azorean experience so memorable was that it was done on the animals’ terms and in their natural environment.

I may not have got as close to the dolphins as I would have at a marine park but that’s a price I will gladly pay to ensure their continuing freedom.