My swim between the landmasses of Europe and America was far less of a challenge than I initially anticipated, it required neither years of training and preparation nor support teams and record-breaking feats of endurance. On the chilly February morning which had been chosen for my swim, I woke in my cosy double bed in Reykjavik (which was to be the starting point of my adventure), enjoyed a delicious continental breakfast and waited for my crew to collect me in reception, without any real sense of trepidation at all. 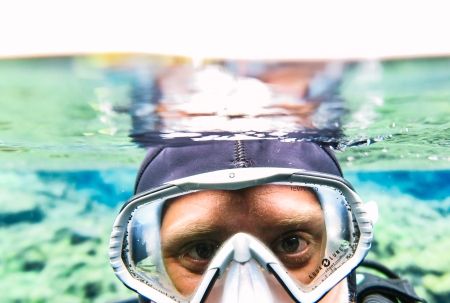 Now you may think that I must be some completely mad, adrenaline seeking, lover of risk......

Now you may think that I must be some completely mad, adrenaline-seeking, lover of risk....but the reality of this situation is that I was waiting for my expert guide to come and get me from the hotel to take me inland for around 45 minutes to the rather stunning Thingvellir National Park in Iceland for an unforgettable swim in a rather pretty lake! 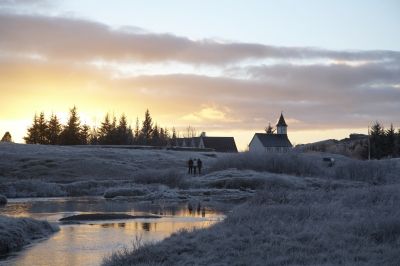 Here, in this wild area of fairly barren land, lies a rift valley (a mini version of the sub-Saharan version!) which marks the top of the Mid-Atlantic Ridge.  This rift has created various fissures in the region, some forming channels off one of the longest lakes in Iceland.

a great dinner party piece but something you might expect one of Iceland's other natural wonders to do rather than me!

It is the Silfra Fissure which was to be my destination for the day, a place where continental tectonic drift has meant that the Eurasian and American plates provide travellers with the chance to take to the waters and literally swim between the continents. A great dinner party piece but something you might expect one of Iceland's other natural wonders to do rather than me! 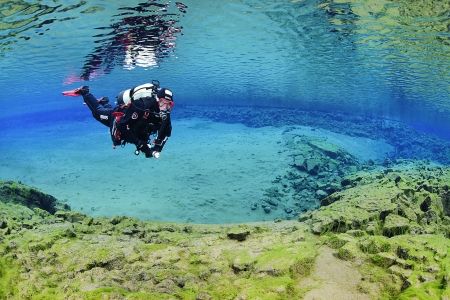 So I found myself standing in the chill of an Icelandic February wind, looking at the water and thinking it all looks a rather unappealing compared to my cosy and snug duvet back at the hotel. Being from the north, I have been known to swim in some chilly water for fun, but to be honest this narrow canyon of water looked freezing cold and fairly uninspiring – how wrong I was!

The real joy here lies in the experience of being in this water as it is amongst some of the purest and clearest in the world. The water in the fissure has quite a journey, starting off as glacial ice; the meltwater takes a journey of between 30 to 100 years to reach the lake, filtering its way through porous lava. This mega filtration means that the water in the fissure is some of the clearest in the world and can be drunk straight from the lake.

Seeing as though this water has made such an effort to be here, I thought I’d better give it due respect and get in. Thankfully this is not one of the occasions where my swimwear had to make an appearance (nobody likes blue legs!). I stepped into my warm down suit (Michelin man had nothing on me in this joyous onesie) and then wrestled into my drysuit and flippers. My snorkel and mask were the crowning glory on this rather unique look, but I was exceedingly grateful for the warmth of this insulation and was now very excited to get into the water.

As elegantly as a seal flopping off a rock

As elegantly as a seal flopping off a rock, I got into the water and braved dipping my face and mask (the only bit of skin to touch the water is a bit of your face) into the water. This is when this experience really takes your breath away, and I do not mean because of the cold! The visibility here is some of the greatest in the world, with snorkelers and divers being able to see around 70 to 80 metres. The colour of the water is almost peacock blue and unlike anything I had seen before or have seen since. It is clear, fresh and stunning. As you slowly glide along on the surface, gently using your flippers to propel you, the water get deeper beneath you and the scale of the fissure becomes apparent as its geological significance really shines through. 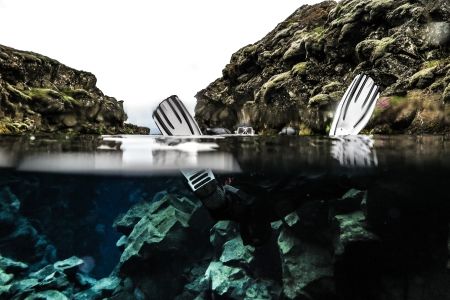 Very possibly the purest water on the planet.

This crack in the Earth sinks to a depth of 65 metres at its deepest, a depth reserved for only the most experienced Scuba professionals. I saw some divers far beneath me, in the more royal blue coloured depths, and I really felt that we were all being given a deceptively serene glimpse of destructive natural forces at work.

My swim between the continents was created by a coming together of some of nature’s most powerful forces. The glacier cutting through the mountains 50 kilometres away provides meltwater that then travels through what was once glowing red molten lava and ends up in a crack in the ground which has been created through two of the biggest chunks of the Earth’s crust pulling themselves apart. It’s a remarkable geological process which creates an awe-inspiring end product. 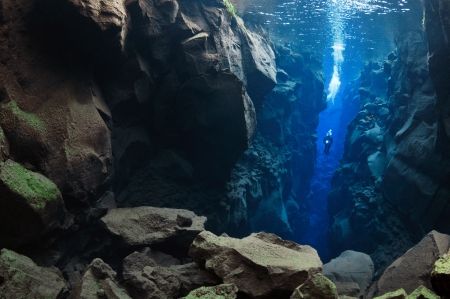 Scuba divers can explore even deeper into the fabulous "Silfra Cathedral"

As I exited the end of the channel and peeled myself out of my outer layers (I was still missing my duvet!), my face was tingling from the cold water but, my theory was that these purest of all waters must have done my skin some good. Aside from this, I just felt a huge sense of privilege that I had been able to witness such a stunning underwater scene and enjoy this remarkably accessible adventure between continents.